For the first annual Turner Brothers Real Estate Summer Games, our team had Rei LeStat make the trek all the way to the Turner Brothers parking lot for televised commentary! Unfortunately our broadcast was not televised due to the fact that we’re lying about that portion BUT, we do have the transcript for you as our announcer walked us through the festivities for the day!

“Welcome to this year’s TBRE Summer Games brought to you by Turner Brothers Real Estate, standing next to me today commentating on the games is absolutely no one. There will be heartbreak, there will be accidentally scraped knees (Marketing Manager Nick, your co-worker Tristan wanted to remind you he’s sorry about your boo boo), and there will be plenty of confusion as to which team shirts are blue and which are green. Special thank you again to our t-shirt printing company, we love you!”

“If I were to say that it is absolutely scorching in the Turner Brothers parking lot today, that would be an understatement. There’s a lot of competitive energy in the air this morning and a lot of competing weather patterns at play; and by that we mean the sidewalk is actually melting underneath our feet. For our first game today we have the water balloon toss wherein each team has to toss a water balloon to each of their teammates without dropping it through 3 full rotations.” 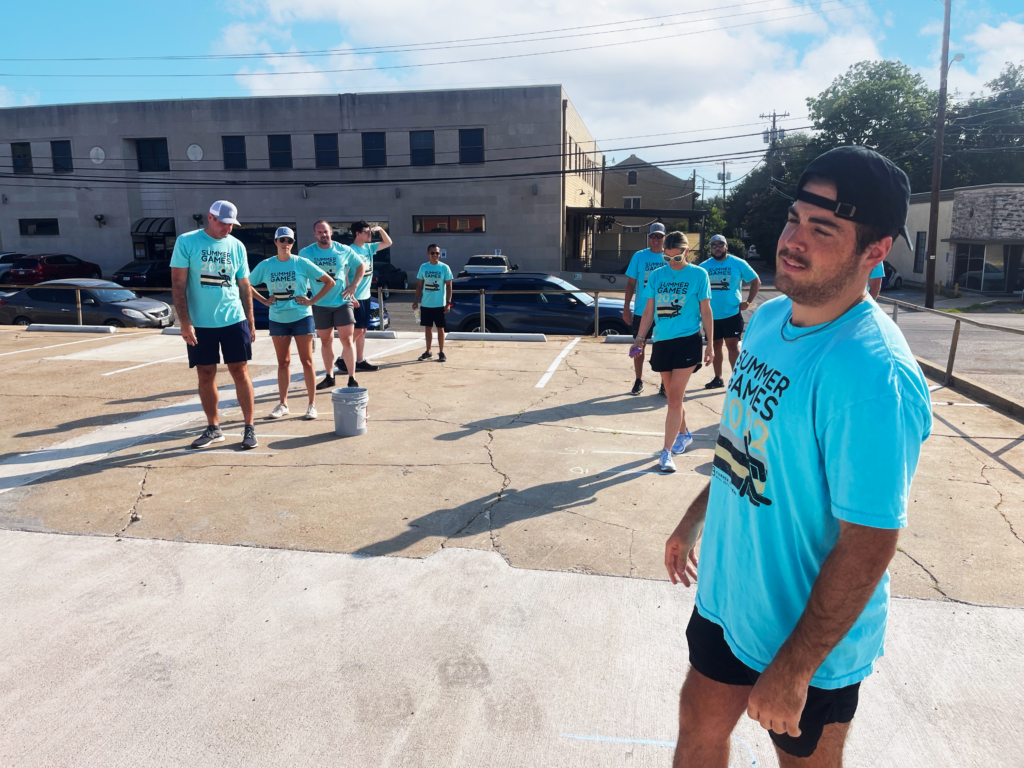 “Definitely the longest game of the day, the balloon toss has been absolutely exhilarating with the winning point this round going to the blue team! Green team members feel the blue team may have had an unfair advantage, mostly due to the fact that water is blue or something like that, I’m not sure, I think they’re just upset.”

“The ‘egg-carry’ is our next game today, similar to the balloons, each team must carry an egg on a spoon between their teeth to each player on their team, making it through 2 full rotations without dropping the egg. In hindsight, our athletes here today were hopped up on stress for absolutely no reason because the eggs did hard boil as they were sitting in their container this morning. Guess no post-game omelets for the announcer this afternoon but don’t worry TBRE, I won’t hold it against you! Maybe.” 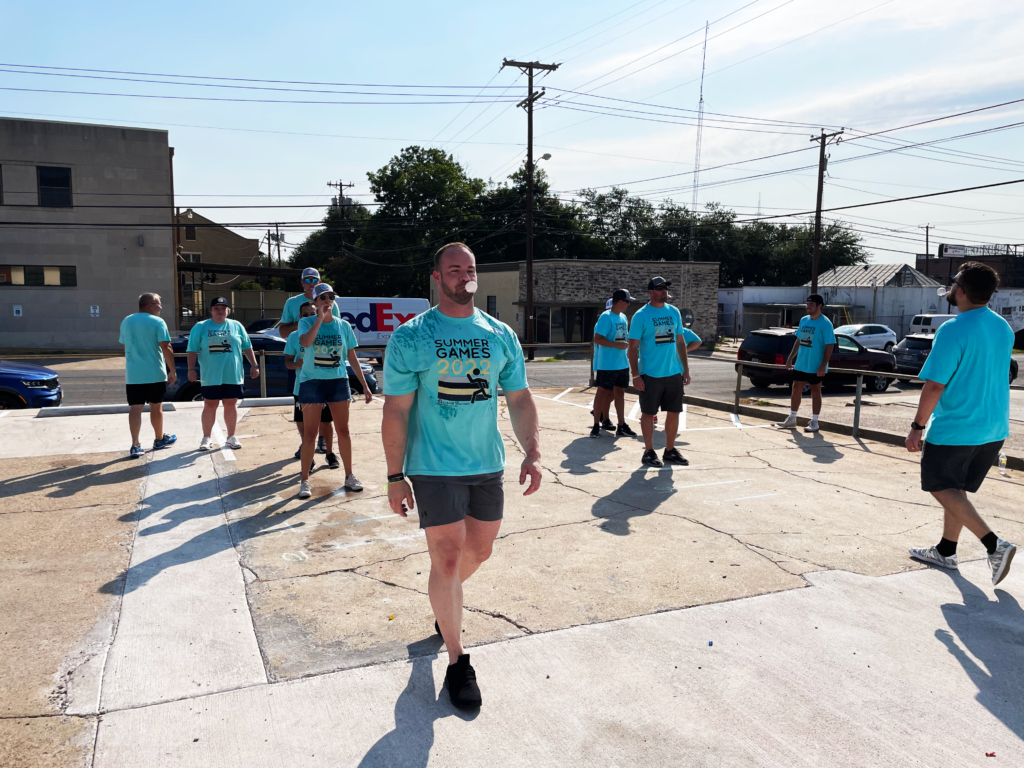 “Green team takes the point for the egg-carry! Our next game today harkens back to the golden days of 2000s kids toy infomercials that you definitely could have made yourself! The first team in the pyramid cup-stacking challenge to build their pyramid and take it down again without a cup touching the floor wins this round.” 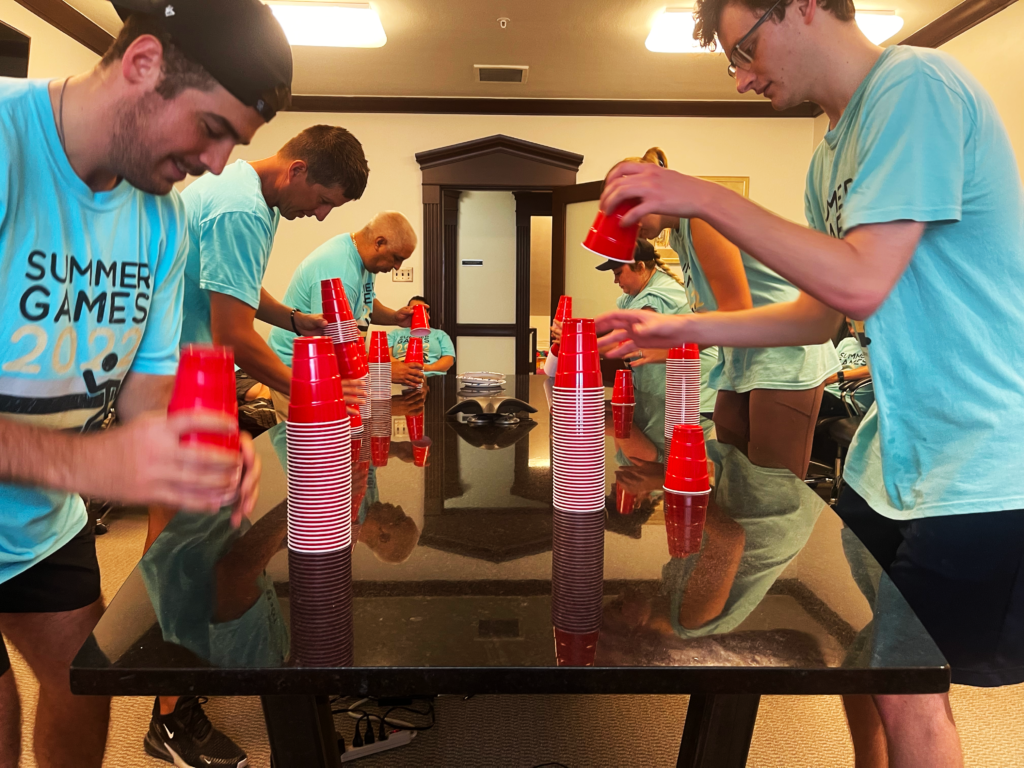 “Green team are the cup-stacking champions, taking home the point for this challenge and racking up that score board! I think I speak for everyone here when I say that moving the games indoors was the choice of the day and that our next challenge, the ‘math’ games, are making the marketing team, specifically, sweat more than they did outside.”

“Surprise, surprise! The blue team with the literal accountant on their roster wins the math games. Sorry for the sass everyone, I’m just hungry and craving my omelets. Guess those hard boiled eggs will just have to do for now! Our 5th and final game this afternoon will be the paper airplane race! The rules are simple, whichever team member makes an airplane that flies the farthest down the office hallway takes the point! My stomach is actually killing me so I’m going to go ahead and spoil this one for you down at the studio…BLUE TEAM WINS! This officially makes the blue team the winners of the first annual TBRE Summer Games! Shout out to Hyla Ruiz from the blue team, crumbling up that paper into a ball and throwing it down the hallway was a brilliant strategy.” 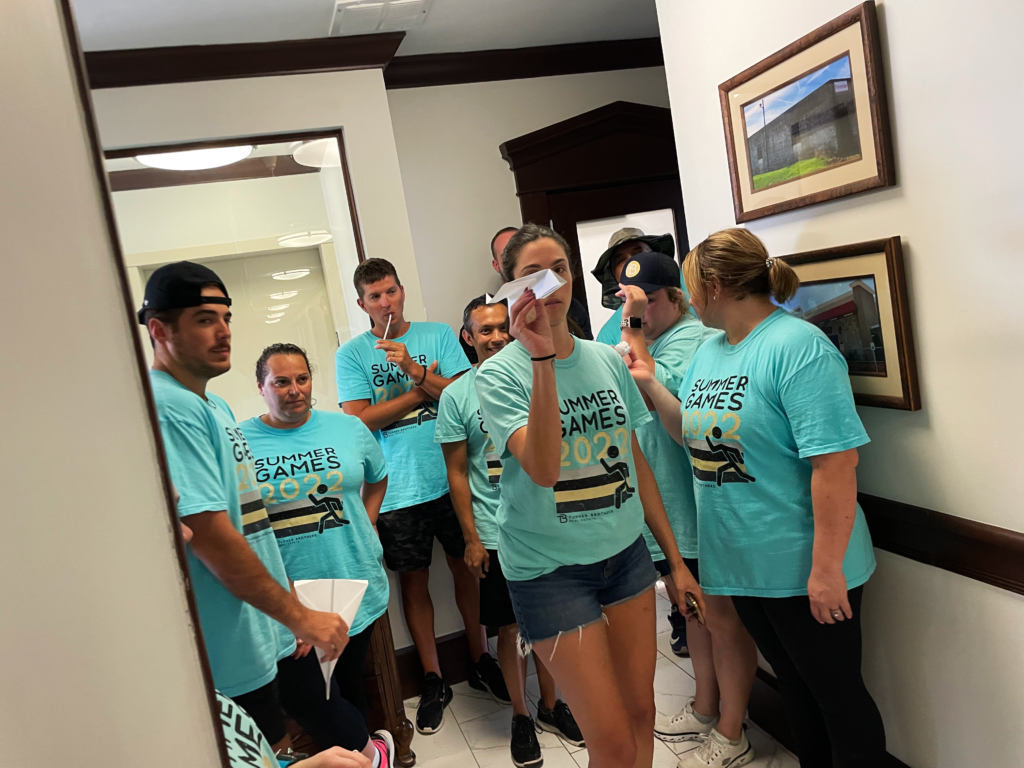